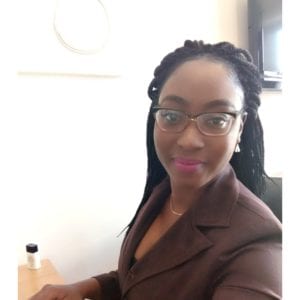 “I am loving it. Everyone has been super nice.”

Abigail caught up with Denielle, who moved from a Big Four Firm in Trinidad to a Medium Tier firm in the Channel Islands.  Denielle flew on one of the last planes between Trinidad and Jersey on Friday 20th March and landed in Jersey on Saturday 21st March, when she had to go into total Isolation for her first 14 days and is now in lock-down, allowed out for up to 2 hours a day for essential trips and exercise.

“There are lots of similarities to the way we worked however I expect different challenges as much as I do opportunities.’’

The firm had dropped a laptop and food, around to the apartment she would be isolating in, prior to her arrival.  The IT team helped her set up remotely and in her first week she had several virtual meetings with HR, her manager and trainers.  Due to the lock down, she has yet to meet any of her team in person, but says the Microsoft Teams Software is very good for meetings.  Denielle said “I am loving it. Everyone has been super nice and helpful.”

Denielle completed all her on-boarding training in the first 4 days.  She started her first remote audit at the end of her first week and her 2nd audit in week 2.   When asked about the work she explained “The most challenging thing was getting used to the new methodology and different acronyms the firm use.  Otherwise, there are lots of similarities to the way they worked in Trinidad.” When asked if she noticed any differences between Jersey and Trinidad yet she replied.  “Jersey has a lot of really friendly people. ’’  Denielle has been scheduled to be auditing until mid-June.  Then she has some accounting projects, which she is also looking forward to.

“The apartment is on a hill with a look out that has a view of the beach.”

Saturday was her first day out.  Due to lock down, she was allowed out for 2 hours. In that time, this exceedingly organised lady managed to do her groceries shopping and found an apartment to move to long term.  “I used a taxi to look at 4 apartments and then I went to the Co-op Shop and walked back.  It was good to see a little of the island as I was doing this.”   Denielle has found a nice studio apartment, fully furnished, in St Helier.  “The apartment is on a hill with a look out that has a view of the beach.”

Denielle should move in at the weekend. However, she has come across a small challenge as she does not have a bank account yet.  Due to lock down she cannot go into the branch to open one.  However, being resilient Denielle has a plan on how to get around this.  In the meantime, the firm have been great and have extended her stay in her current apartment and are covering the costs.  They have also negotiated a fantastic rate for her to stay there longer should she not be able to make the move to her new apartment this weekend.

Brave, determined and focused.  “When I make up my mind to do something and say I will, I go through with it.”

Abigail asked Denielle “You were very determined to get to the Channel Islands and start your new role, despite current challenges and the likelihood of isolation. What made you decide to go ahead and make the move when you did?”  Denielle replied “When I make up my mind to do something and say I will, I go through with it.  I knew Jersey might be going into lock down and it was likely I had to isolate. However,  Trinidad had the virus anyway and it was likely to be the same there.  I wanted to get to my new job and start it.”   Abigail “Are you pleased you made the move?”.  Denielle “I am, I am!”.